Arts and symbols of our beloved church

Statues of the church

The series of the life-like wood statues were made by Austrian masters from Tyrol, between 1960-1970. In the entrance area you see a carving of St. Elizabeth with the miracles of the roses. In the Gallery there is the statue of the Holy Family. When entering the church and turning left, you see the statue of St. Anthony. Further in the left corner you will come across the statue of Virgin Mary with Hungarian symbols: she wears the Hungarian Crown as a symbol that the first Christian king, St. Stephen dedicated Hungary to the Virgin Mary in 1038. At her leg you will notice the traditional scutcheon (coat of arms) of Hungary. If you turn right at that point, you will see the statue of St. Joseph.

The stained-glass windows were designed by some artistic talented Hungarian sisters from the Congregation of Sisters of Kalocsa. We describe here the images from left to right by facing the altar.

Saint John of Capistrano (24 June 1386 – 23 October 1456) was a Franciscan friar and Catholic priest from Italy. He became famous as a preacher and theologian. He was known as “The Soldier Saint” who in 1456 at age 70, led a crucial Crusade against the invading Ottoman Empire at the siege of the most important Hungarian border fortress of Nándorfehérvár (today: Belgrade). With this victory, Hungary was protected from Ottoman attack for over 70 years. In Hungary, church bells ring out each day at noon in memory of that victory! Just 500 years later, the Hungarian Uprising of 1956 started! (Feast: 23. October)

Saint Margaret of Scotland (c. 1045-1093) was born in Hungary to the expatriate English prince and the daughter of Saint Stephen of Hungary. They returned to England in 1057. As a widow, Margaret married Malcolm, the Scottish king. The queen ‘tamed’ her husband, known for his ferocity, and became the benefactor of her people, helper of the poor and patron of the Church. Some of the church reforms attributed to her are: she unified the liturgy, ended abuses within the church, founded churches and monasteries. She is held to be one of the ancestors of the British monarchy. (Feast: 16 June)

Saint Gellért was born in Venice, became a Benedictine monk, studied in Bologna and was soon elected an abbot. He resigned after three years and went to the Holy Land. His ship was caught in a storm, and he instead arrived in Hungary. King Stephen hired Gellért to become the tutor of his son, Imre. In 1028, King Stephen requested him to establish the diocese on the banks of the Maros river. He progressed well with constructing churches and church schools, but the death of the king in 1038 changed everything through a national uprising led by the pagans. On 24 September 1046 Gellért and his group were attacked by a band of pagans. Gellért was dragged out of his carriage, pierced with pikes a several times, after which they threw him down from the hill in Budapest that was later named after him. He died a martyr for Christianity. (Feast: 24 September).

Saint Piroska or Irene of Hungary (1088 – 13 August 1134) was a Byzantine empress, a daughter of Saint Ladislaus. Irene was devoting herself to piety and her many children. She was, with her husband, the patron of the construction of the Monastery of Christ Pantokrator in Constantinople. This monastery contained three churches and a hospital with 5 wards, which was open to people of all social classes. She is the only saint venerated both in western and eastern Christianity (Feast: 13 August)

Saint Ladislaus or László (c. 1040 – 29 July 1095), also known as Saint Ladislas, was King of Hungary from 1077. After a series of civil wars, the main focus of the life of St. Ladislaus was the restoration of public safety. He introduced laws that severely punished those who violated property rights with death or mutilation. Ladislaus’s victories over the nomadic tribes attacking Hungary ensured the security of his kingdom’s eastern borders for about 150 years. Legends depict him as a pious knight-king. (Feast: 27 June)

Saint Emeric (1007-1031) was the son of King St. Stephen. Emeric was educated in a strict and ascetic spirit by the Benedictine Saint Gellért from the age of 15 to 23. He was intended to be the next monarch of Hungary, and his father wrote his Admonitions to prepare him for this task, which is an inspirational letter about an ideal Christian King. He did not live to inherit St.Stephen’s throne as he died in a hunting accident. It is believed that Amerigo Vespucci, the Italian explorer and the namesake of the Americas, was named after the saint. (Feast: 5 November)

Saint Stephen of Hungary (975-1038), the monarch who led his country to embrace the Christian faith during the 11th century. In 1000, Pope Sylvester II sent him a crown, used until 1916 to crown the Hungarian kings. He showed great diligence as king, while devoting the rest of his time to his religious duties. He fulfilled the Pope’s charge to use his royal authority for the good of the Church. When losing his son, Emeric, in 1038, Stephen commended Hungary to the Virgin Mary. (Feast: 20 August)

Saint Gisela of Hungary (c. 985–1065) was the first queen consort of Hungary, by marriage to King Stephen. She was raised in a very devout family and married King Stephen in 996 as a part of Hungary’s policy of opening up towards the West. Queen Gisela played a fundamental role in spreading the Christian faith and Western culture in Hungary. The picture depicts her embroidering the royal coronation cape, which remains a principal relic of the coronation insignia to this day. (Feast: 7 May)

Saint Margaret of Hungary (1242-70) was a Dominican nun, whose parents were the King and Queen of Hungary. They vowed to offer up their child to religious life if their homeland was freed of the Mongol invaders occupying Hungary in 1241. She was sent to a Dominican monastery at the age of four. When Margaret was 18, Ottokar, King of Bohemia, sought her hand in marriage, even after he had seen her in her religious dress. A dispensation could easily have been arranged, and King Béla was inclined to favor this for political reasons. But Margaret declared that she would disfigure herself, cut off her nose and lips, rather than consent to leave the cloister. In fact, when she became aware of a tendency to treat her with special consideration, she deliberately sought to perform the services that were most menial and repulsive, and with extraordinary tenderness and charity. (Feast: 18 January)

Saint Ignatius Loyola (1491-1556) As a young man, Ignatius Loyola was inflamed by the ideals of courtly love and knighthood and dreamed of doing great deeds. But in 1521, Ignatius was gravely wounded in a battle against the French. While recuperating, he experienced a conversion. Over the years, Ignatius became expert in the art of spiritual direction. With a small group of followers, he founded the Society of Jesus, or the Jesuits. Ignatius conceived the Jesuits as “contemplatives in action” and wanted them to go out and “find God in all things.” He is pictured among the Hungarian saints because of the Jesuits serving this parish. (Feast: 31 July)

Saint Kinga of Poland (1224–1292) is the patroness of Poland and Lithuania. She was born as the daughter of King Béla IV of Hungary, a niece of Elizabeth, and a niece of Margaret of Hungary. She reluctantly married Bolesław, the Grand Duke of Poland. Despite the marriage, the devout couple took up a vow of chastity. During her reign, Kinga was involved in charitable works, such as visiting the poor and helping the lepers. When her husband died in 1279, she sold all her material possessions and gave the money to the poor and decided to join the order of the Poor Clare nuns. (Feast: 24 July)

Martyrs of Kassa, 1619. Kassa (today: Kosice) was a Calvinist stronghold in Hungary in the early seventeenth century. These martyrs (Melichar Grodziecký was a Polish Jesuit, Marek Križín was a Croatian parish priest, István Pongrácz was a Hungarian Jesuit) came from three nations in order to offer the sacraments to Catholics who were otherwise without priests. In the Thirty Years War, after the siege of the city, the Calvinist soldiers tried to force them to abandon their faith. Upon their refusal, the priests were brutally beaten and killed. (Feast: 7 September)

Saint Hedvig or Jadwiga (1373-1399), was the first female monarch of the Kingdom of Poland, reigning from 16 October 1384 until her death. She was the daughter of King Louis I. of Hungary. She married Jagiello of Lithuania, a pagan ruler, who became a Christian only after the marriage, and then actively promoted Christianity in Lithuania. She established new hospitals, schools and churches, and restored older ones. Jadwiga promoted the use of vernacular in church services, especially the singing of hymns in Polish and the translation of the Scriptures. She had the University of Kraków restored. (Feast: 17 July)

The mosaics in our church hall were designed and created at the end of the 1970’s, by the superior of the Teaching Order of Kalocsa nuns, Moullion Erzsébet M. Antonia, and members of her order. The Stations of the Cross and the terracotta picture of the Last Supper above the exit are the work of Attila Keszei, a Canadian-Hungarian artist, done in the Japanese ‘raku’ style, in 2019-20. (More about him: http://www.artterrastudio.com)

The Casavant organ at St. Elizabeth of Hungary Parish in Toronto was dedicated on March 11th, 1978, as part of the 50th anniversary of the founding of the parish. In 1985 Casavant Frères moved the organ from the original church location. This Casavant organ has eighteen stops across two manuals and pedals, for a total of 1180 wood and metal pipes. It was designed by György Zadubán, Director of Music at St. Elizabeth from 1960 until his death in 2003, and Prof. Ferenc Gergely (Budapest), in collaboration with Casavant’s representative Alan T. Jackson. The organ, which is built with electro-pneumatic action and is contained in two oak cases, is designed in the North Germanic style. It is versatile enough to render a broad range of the organ literature convincingly. St. Elizabeth offers a quiet, contemplative space in which to encounter great classical music. Our Music Vesper-liturgy on the last Saturday of the month can offer something much deeper than a concert alone. To encounter superb classical music performed by renowned virtuosos in the context of a short liturgy is truly the best way to connect with both the music and the space. Our plans of reconstruction – beyond a larger cleaning – are to enlarge the instrument and enrich its tonal palette, by adding a Fagott 32′ stop to the pedal, a Trompette en Chamade 8′ stop & a new memory bank to the current console. 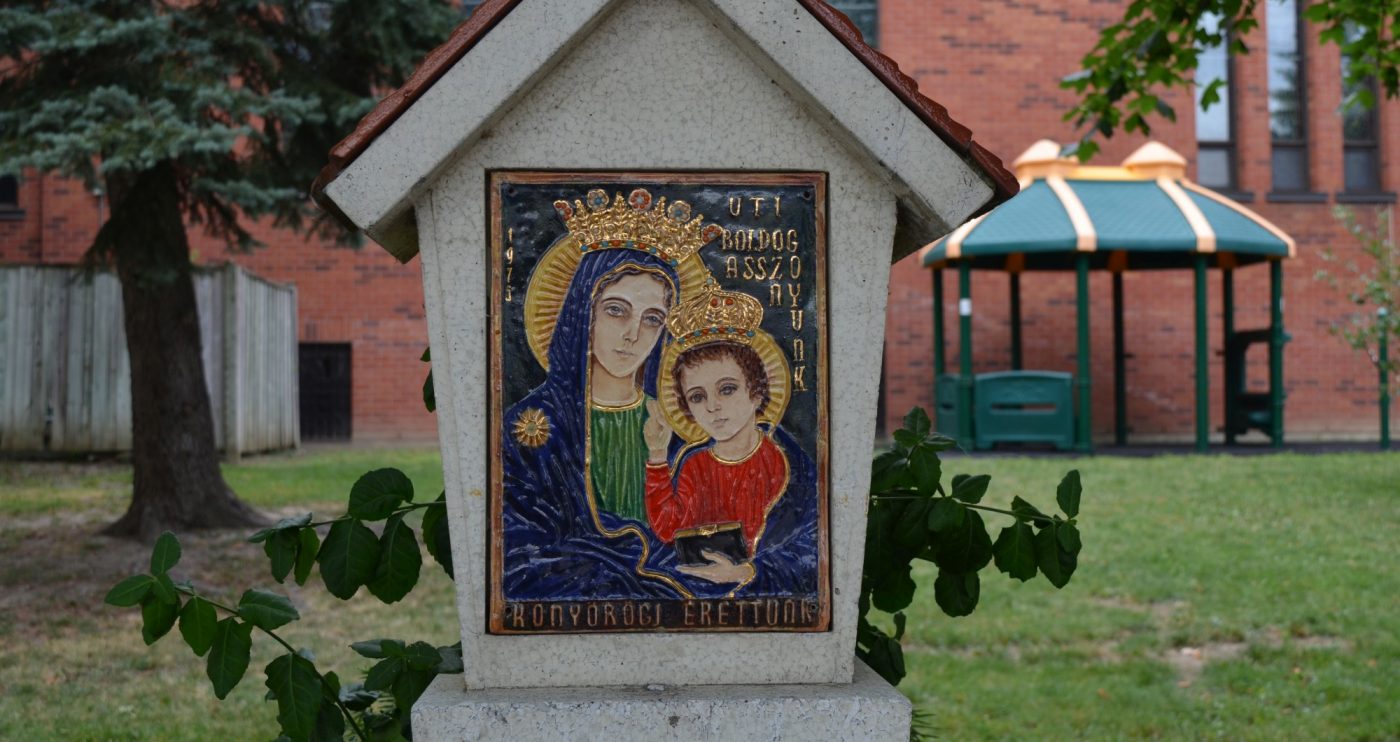